Today’s Native American small world focuses on different tribes, color symbolism, and general beliefs. We’re part Seminole, so this will also be an introduction to part of our heritage for Little C. We even took our indoor small world outdoors to our rock garden! Our sensory materials include water beads, sand, rocks, moss, plus a homemade drum craft and hand painted teepee made from sticks.

Native American culture revolved heavily around nature and Earth. Native Americans believe that everything is alive, and possesses an inherent virtue, power and wisdom. In the ancient culture and traditions of Native Americans, the meaning of animals was tied to the belief that animals, as spirit guides, walk through different stages of life with a person, teaching and guiding them, and in some instances protecting them. First, let’s begin with our DIY stick teepee tutorial. 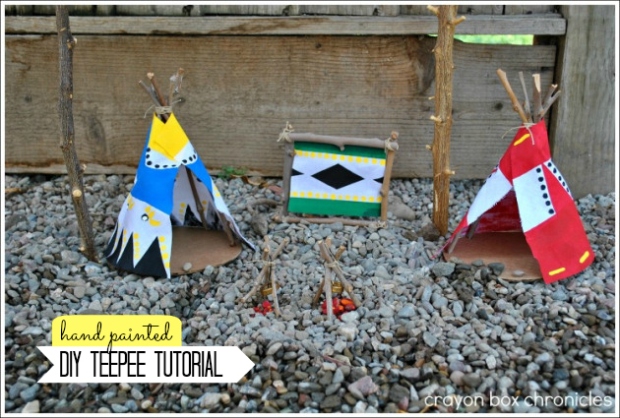 To construct the teepee, you’ll need the following materials: (affiliate links, thank you!)

Let’s begin by constructing the base of the teepee. Above are the measurements and materials.

Set aside the base and allow it to dry completely. Now let’s work on the shell.  I used basic white fabric. Cut your teepee shell using the above measurements 7″ x 16″. This will take some trial and error. If you want a larger or smaller teepee, just adjust your measurements. I practiced on paper first, then I used the template to cut my fabric. Once you’re happy, the fun begins.

I used red, yellow, white, black, and blue acrylic paints. For the straight lines I used painters tape, for the dots I used q-tips, and everything else was hand painted. This is a super fun activity for older children too.  I just love how all the colors really pop! Colors and symbols are an important part of the Native American culture. Native tribes told stories through the use of symbols and colors. Generally, they represented a large battle or hunt, identified different tribes, and played a spiritual role at ceremonies. 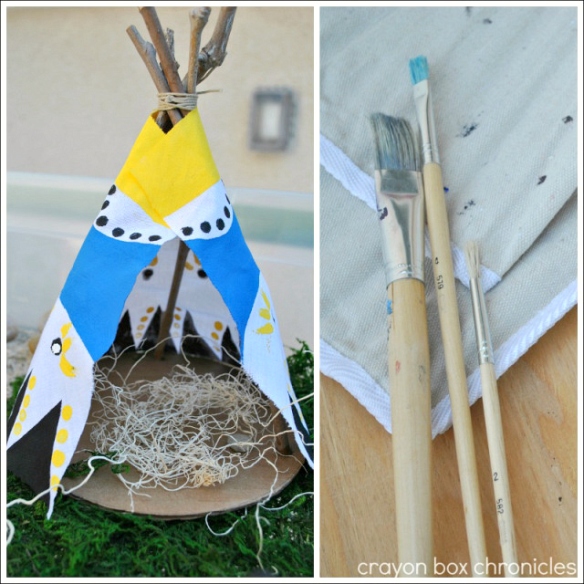 Here’s an assembled teepee above. Once you’re finished painting the fabric, allow it to dry, then attach your teepee at the top using hot glue or tacky glue for kids. Let’s take a sneak peek inside our Native American Small World.

Before we explore small world sensory play, let’s construct our homemade drum. Drums played a very important role in Native American tribal ceremonies, celebrations, and spiritual gatherings. The drum is its own living entity, symbolizing a beating heart connected to the Earth. The sound calls upon the great spirits to open a pathway for negative energy to leave the body and positive energy to heal it. Different tribes have different traditions about their drums. For larger dances tribes would use a Powwow drum. Let’s have fun and make a “powwow” drum to play as we learn and embrace all the beautiful Native American Indian traditions. 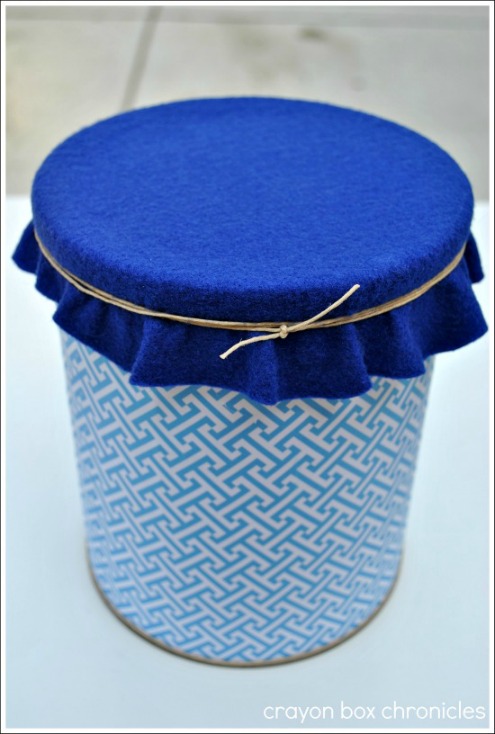 To construct the drum, you’ll need the following materials:

This drum is simple to make and lots of fun! The kids can join in the making-of too. 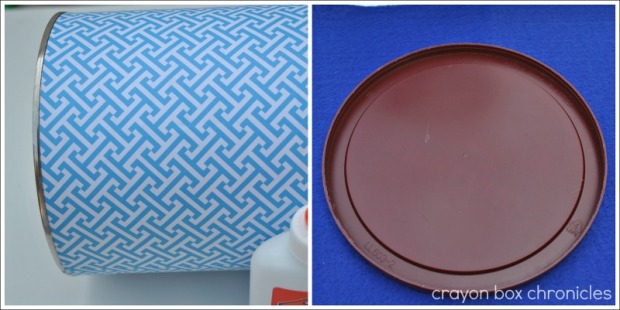 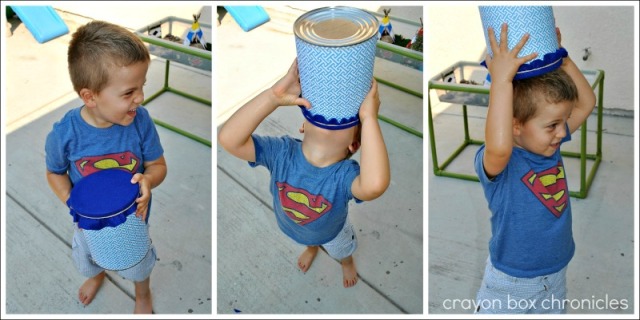 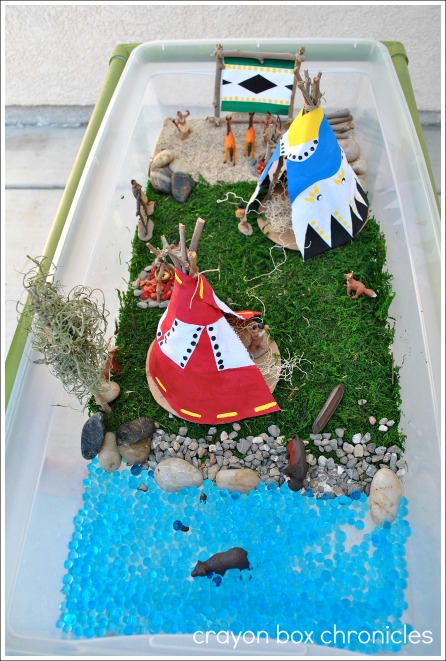 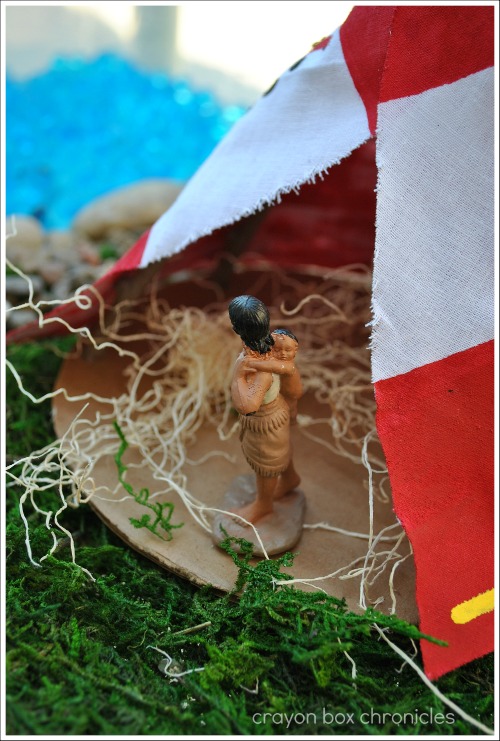 This is my favorite picture! It reminds me so much of me and my son. I carried him for as long as I possibly could in a wrap. There’s something so special and sacred between a mother and child. I just love this capture and Native American traditions.  In modern-day, we’ve adapted this same tradition with baby carriers and cloth wraps.

A Powhatan woman is cooking near the red-hot fire stone coals. I assembled the mini-fire pits the same way as the teepee. Cut three small sticks and secure tightly with twine. I knew C would love the fire pits and want to move them around, so I added a small amount of hot glue at the top for extra security. The button resembles the “pots” made from stone and I painted the fire rocks red and orange. Behind her is the animal hide drying out. During winter months, Indians used the hides to keep warm.

The bear is thought to be the master of the forest and is well-respected among Native Tribes. Many believe that when the Native American bear went into hibernation his spirit form would come out and roam freely. Animals are part of the sacred Earth and treated with the up-most respect. Native Americans would honor their spirit and use the hide for clothing and bones for tools. It’s unfortunate that as a people we do not have the same time-honored traditions today.

Water beads are a great sensory material! It’s C’s favorite material to date. Bear likes them too. With C’s love for animals it was no surprise that he immediately went for Bear and Bull during play time. On water, the Powhatan’s used dugout canoes made from hollowing out large trees. Over land, the Powhatan Indians used dogs as pack animals.

Traditionally, bows and arrows, lances, knives, hatchets, and clubs were not uncommon, by far the Native American spear was the weapon of choice for most tribes. Native American spears were hand-made and were often used as a status symbol amongst tribes. Powhatan warriors used tomahawks or heavy wooden war clubs. 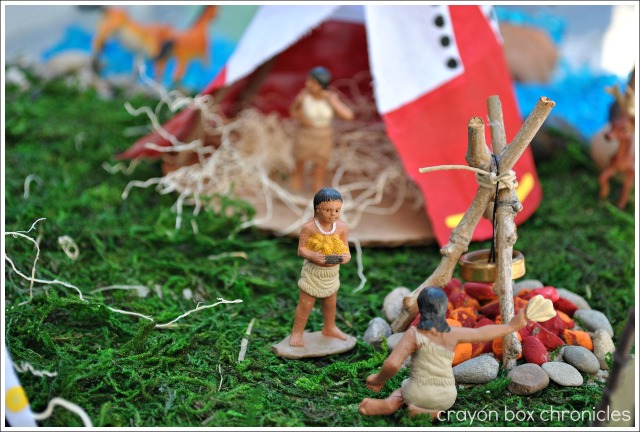 I love all the vibrant colors and textures too! This type of moss is a new material for our sensory bin worlds. It’s a moss mat. I highly recommend it for small world play because is thinner than traditional loose moss and the miniature figures can stand up-right on it. 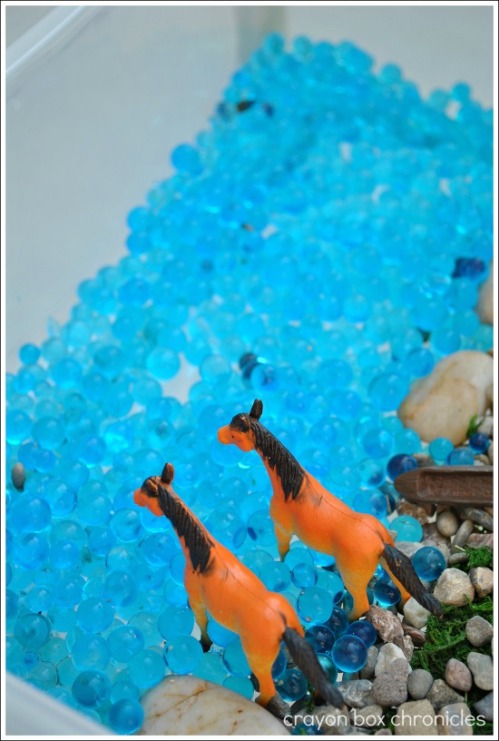 Horses weren’t introduced to Native Americans until the Spanish settlers arrived and taught them how to use them for transportation. Once adapted, horses became an important part of travel and trade. Eventually, the horse was the second animal to be domesticated by the Native people.

Today’s small world play was full of history, traditions, and sensory fun! It was a nice introduction to teaching Little C about parts of our heritage and world history. The teepee and homemade drum will continue to be apart of his daily play time. I hope you enjoyed our journey today. Looking for more small world play?

Happy drumming too! C just loves his drum! He used wooden spoons, a plastic drum stick, and his hands to drum.

“Every seed is awakened and so is animal life. It is through this mysterious power that we too have our being and we therefore yield to our animal neighbors the same right as ourselves, to inhabit this land.” ~ Sitting Bull

If you’re looking for more Thanksgiving crafts, here are over 95 awesome, easy crafts and activities for kids to explore.

Are you following our Kids Crafts & Activities Board on Pinterest? 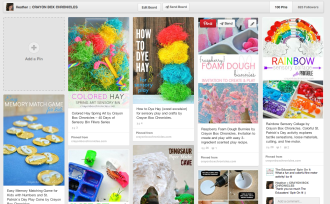 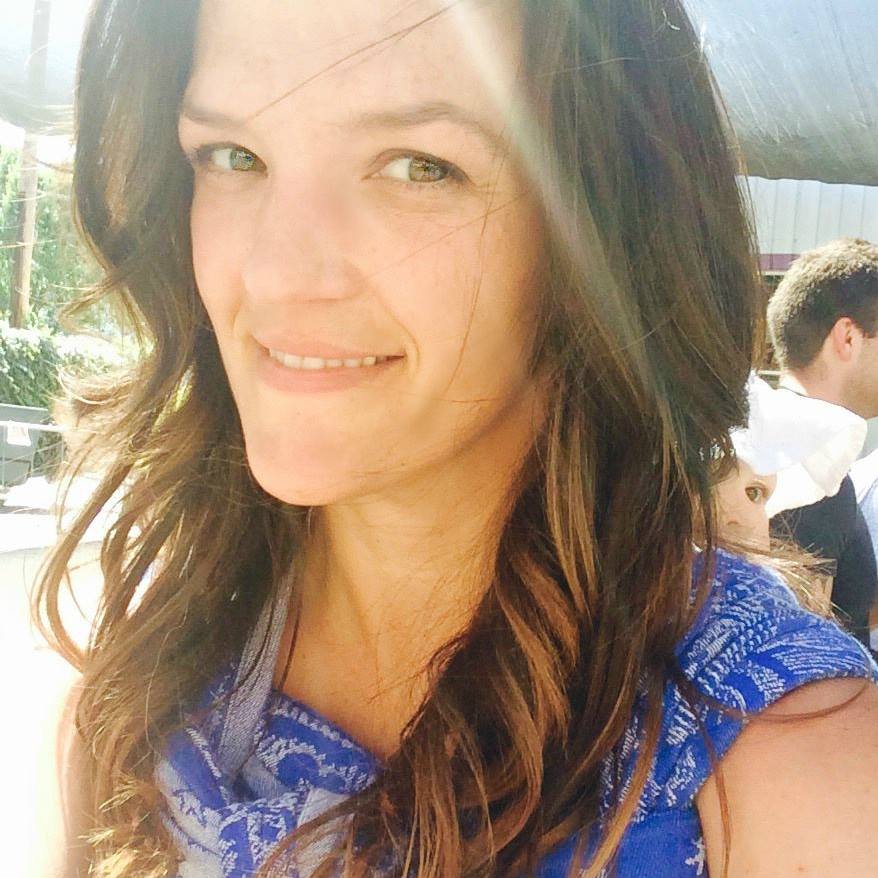 Hello! I'm Heather! My budding artist and I love to paint with everything but a paintbrush, up-cycle simple household finds, and explore messy sensory play together. His favorite fun-time is chasing me around with his dino tail - RAWR! His imagination surprises me everyday!

To read more about us and our silly antics click here. 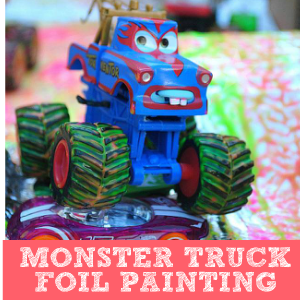 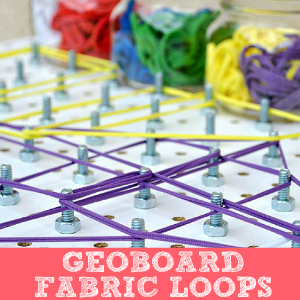 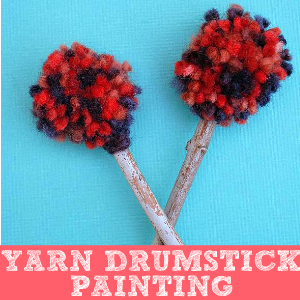 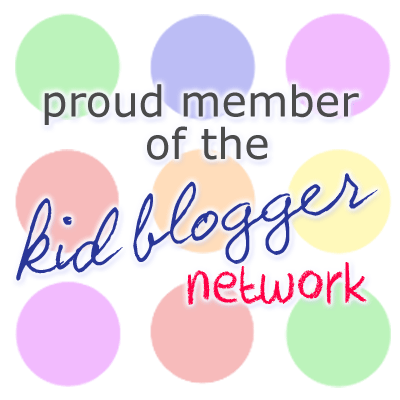 Disclosure:
Crayon Box Chronicles participants in the Amazon Services LLC Associates Program, an affiliate advertising program. All affiliate links will be clearly highlighted and you will be directed to the Amazon.com website.

If you purchase through the link, we receive a small percentage of your purchase.  It's greatly appreciated and we want to sincerely thank you. For full disclosure and private policy, click here.

For questions, comments, or feedback, please contact me here.